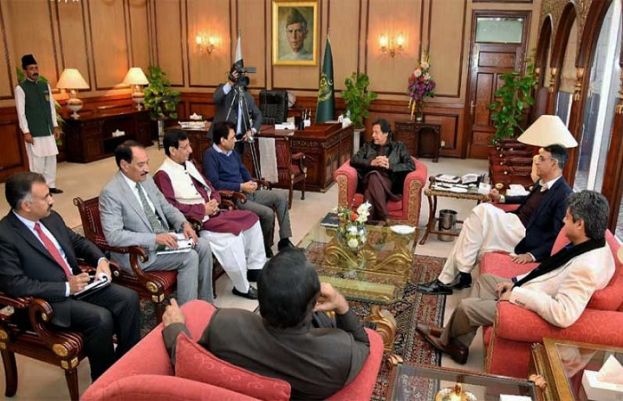 Leaders of the BAP and MQM-P were set to meet Prime Minister Imran Khan ahead of the premier's dinner party in honour of the coalition leaders scheduled later today.

A BAP delegation was set to meet the prime minister at 6pm. Defence Production Minister Zubaida Jalal, as well as Mir Khalid Magsi and Sardar Israr Tareen, would also be part of the meeting.

The approval of Budget 2020-21 and Balochistan's issues, among other topics, were expected to be brought up in the meeting. The BAP would also attend the dinner later at night.

In addition, a delegation of the MQM-P would also meet PM Imran prior to the dinner, which the coalition party has said it would attend, sources said.

During the meeting, developmental projects in Karachi, the MQM-P's reservations and demands, and other important matters would be discussed.

It is pertinent to mention here that Bugti, as well as member of the National Assembly Aslam Bhutani, had earlier this week warned the PTI government of breaking alliance if the promises made to them were not fulfilled within seven days. Bhutani, on the other hand, had said there was a dearth of "treating MNAs with respect".

Gill, the special assistant, added that guests would be treated with "one-dish qorma, matar chawal [peas and rice], and naan [bread]". He stressed that PM Imran Khan would personally bear the expenses of the dinner, as opposed to what had been done in the past.

However, Railways Minister Sheikh Rashid Ahmad excused himself from the dinner, citing his poor health; the AML-leader had tested positive for the deadly coronavirus earlier this month and was even admitted to the hospital as per a June 14 report.

"I'm not feeling well, I wish to rest," Rashid said.

Earlier, The News had reported that BNP-M, the former coalition party led by Akhtar Mengal, had refused to attend the prime minister's dinner for the government's MPs and lawmakers from allied parties.

The PM Office had invited BNP-P chief Akhtar Mengal and party leader Jahanzeb Jamaldini for the dinner; however, the party maintained that since it was no longer a part of the government, there was no sense in attending the event.

It is worthy to note that Mengal had announced on June 17 that his party was parting ways with the PTI-led government after remaining part of the coalition for nearly two years.

Separately, the PML-Q's Chaudhry brothers — Chaudhry Shujaat Hussain and his cousin, Chaudhry Pervez Elahi — have also invited the leaders of the coalition parties for dinner today.

The Chaudhry brothers had invited the coalition leaders before the Prime Minister's dinner, the sources said, adding that multiple politicians of the allied parties had confirmed their attendance.

The Chaudhry brothers have invited leaders of the MQM-P, BAP, and GDA, as well as the independent politicians but not the ruling PTI's leaders, the sources added.