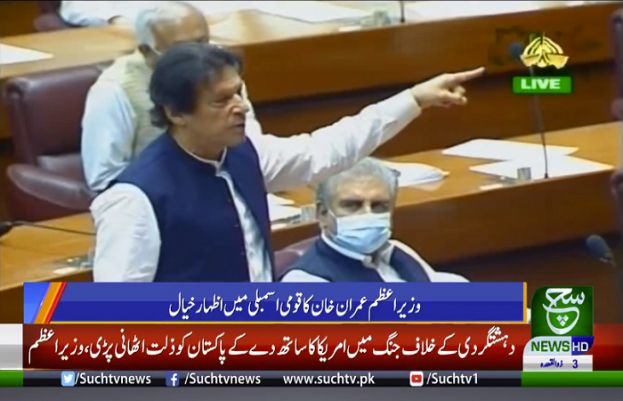 Prime Minister Imran Khan on Thursday defended his government's response to the coronavirus crisis, saying there has been no confusion or contradiction in official policies since the start of the pandemic.

Speaking in the parliament during the budget session, the premier said he had stressed from day one the need to balance measures to fight the virus and preventing people from going hungry.

"They say again and again that there was confusion … if there was one country whose government did not have confusion, it was ours," he said to applause from other treasury members.

He said the government had imposed a lockdown to curb the spread of Covid-19 when the country had only 26 cases and no deaths. At that point, he added, the provinces had "reacted themselves" because lockdown had become a worldwide phenomenon and the country did not have "centralised planning".

But he said he and his team feared from day one that the lockdown model used by Western countries and China could not be copied in Pakistan because the situation in the subcontinent was "very different".

"I said from day one we had a dual problem; we had to save the people from corona and hunger, and those dying from poverty," he added, acknowledging that his government had to face "a lot of criticism" at the start and there was pressure, including from cabinet members, to implement a more strict lockdown "as did by India".

But he said the data now coming in had shown that the government took the right steps to respond to the health crisis.

Addressing the opposition benches, he challenged their lawmakers to "point out one statement that had inconsistency" since the lockdown was first announced on March 13.

"I constantly talked about two things: if you have the population of Singapore, if you have $50,000 per capita income [and] if you have natural social distancing, then curfew is the way to go.

"But i also talked about how the restrictions would impact the poor people based on our conditions," he added.

Recalling that the government did not have any data on available ventilators and intensive care staff initially, Imran lauded the National Command and Operation Centre for collecting all the information on a daily basis and looking at trends with expert help due to which "our decision making was free of inconsistencies".

Reiterating the "destruction" a sweeping lockdown could cause to a country, Prime Minister Imran said: "India's reports are in front of the world … figures show that 34 per cent people have been steeped into poverty. Their hospitals are facing difficulties; they are full."

He said the government had opened the construction sector first and now the whole world was saying that "there are more negative effects of lockdown as compared to its impact on controlling the virus."

Citing the example of New York, Imran said even "the strongest economy is also realising you cannot close down an economy."

He added that his government was the first to talk about a 'smart' lockdown. "This is the hallmark of our NCOC; look at our population and how we have navigated this hurdle."

At the same time, the premier told the nation that they have a "very difficult situation" in front of them.

"The next phase is difficult because we are trying to make people understand why following standard operating procedures is so important," he said, adding that the virus spreads when there are clusters.

He said the country had two paths going forward: there are enough facilities to cope with the virus if people take precautions, but if people show carelessness, the disease will continue to wreak havoc.

"If we spend this month while following precautions then we can save ourselves from [the virus's] bad effects," he said, condoling with the families of the nearly 4,000 people who have died of Covid-19 in the country.