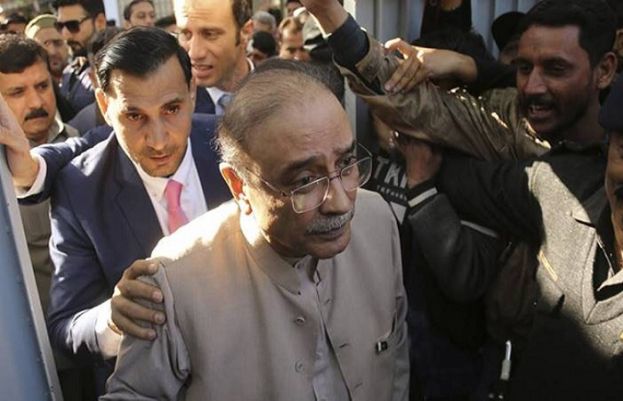 An accountability court on Monday again deferred the indictment of former president Asif Ali Zardari in Park Lane reference after his counsel Advocate Farooq H. Naek filed a last-minute petition against the proceedings.

As the hearing of the case resumed today, Zardari’s lawyer Farooq H Naik filed a petition in an Islamabad accountability court to stop the indictment against the former president.

Zardari’s counsel Farooq H Naik in his petition maintained that proceedings against his client were not legally justified so the court should stop the indictment.

Naek asked the judge to issue a notice to NAB on the new petition and adjourned the proceedings till next Tuesday as he has to do some more research on the case.

Judge Azam Khan asked Naek to appear before the court on July 9.

To which, Zardari’s lawyer said that he has to represent another client in a different case in the Supreme Court Karachi Registry on July 9.

However, the judge postponed the indictment against PPP leader Asif Zardari and set a hearing for the new petition on July 14.

Asif Ali Zardari, his sister Faryal Talpur and other accused face charges of corruption through fake bank accounts and embezzlement in the financial facility for Park Lane Private Limited and Parthenon (Pvt) Limited.

According to the anti-graft watchdog, Asif Ali Zardari was allegedly running a fake front company by the name of Parathon as a shareholder in Park Lane properties.

A loan worth Rs 1.5 billion was taken from a bank and transferred to the company’s account in a private bank