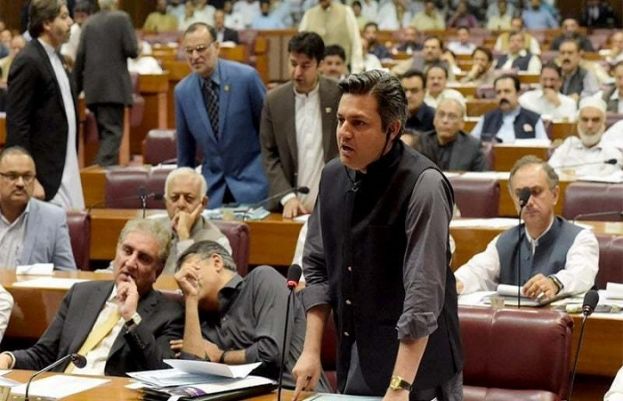 The National Assembly of Pakistan approved the federal budget for the fiscal year 2020-2021 on Monday, despite the opposition's vow to not let it sail through the House.

Federal Minister for Industries and Production Hammad Azhar had presented a Rs7.14 trillion budget for fiscal 2020-21 on June 12.

Today, the government benches were also successful in getting approved the Finance Bill 2020 to give effect to the financial proposals. The amendments proposed by the Opposition in the bill were rejected by the House.

Prime Minister Imran Khan also arrived at the National Assembly session, where the clause-wise amendments to the Finance Bill began in order to sail it through the House.

As the process began, the NA speaker said that any amendment to remove an entire clause will not be acceptable.

The speaker made the statement after PPP’s Shazia Mari proposed amendment to remove an entire clause.

After approval of the budget, the House adjourned the session until 11am on Tuesday.

Earlier, the opposition had agreed to build a united front against the budget and made fiery speeches on the national issues in today's session.

Apart from protesting the budget, opposition lawmakers have also decided to demand the prime minister’s resignation.

Federal Minister for Information Shibli Faraz had earlier said the federal budget will be approved today, adding that the PTI will put its ‘full force’ to ensure it.

He had said that the opposition will get over its misconceptions about the budget in time.

Earlier, senior opposition leaders from the PPP, PML-N and the JUI-F had described it as an "enemy of the people". Reacting to the budget, PML-N president Shehbaz Sharif had predicted that inflation and unemployment would surge as a result of it.

Erstwhile government ally Balochistan National Party-Mengal (BNP-M) leader Akhtar Mengal had also announced that his party was breaking its alliance with the ruling coalition, which caused a momentary hurdle for the government by depleting its numbers in the House.

PPP Chairman Bilawal Bhutto demanded the resignation of Prime Minister Imran Khan in his speech in the NA, saying that the premier should apologise for destroying the economy.

While addressing the House, Bilawal said that the PM has two options; either he works alongside all the political parties and strive for the betterment of the country, or he resigns and goes home.

Bilawal said that due to the ruling party, the oil companies benefited from the hike in petroleum prices.

“The prime minister should apologise for destroying the country,” said the PPP chairman, adding that the ruling party has usurped the rights of the people.

“The prime minister should not take notice of anything. He took notice of medicines, they became expensive, when he (PM Imran) took notice of sugar and wheat crisis, then they also got costly,” he said.

The PPP leader said that the pilots and Civil Aviation Authority were character-assassinated at an international level.

“What sort of relief is putting people out of jobs?” he said before the House, adding that not making any addition to salaries and pensions is also an ‘injustice’.

PML-N leader Khawaja Asif also addressed the House, where he had a verbal spat with Federal Minister for Science and Technology Fawad Chaudhry.

In his fiery speech, Asif criticised the prime minister for calling Osama Bin Laden a martyr. “May Allah save us from terrorists and their supporters.”

Chaudhry, however, interrupted the former defence minister’s speech by asking him to cut it short.

“I will say such a thing about you that you will find it difficult to remain seated in this House,” said the PML-N lawmaker.

Following the debacle, Chaudhry asked the NA speaker to make Asif rescind his statement and apologise.

During his speech, Asif remarked on today’s terrorist attack on the Pakistan Stock Exchange in Karachi, saying the country is united against terrorism.

He added the prime minister’s statement on OBL damaged the measures Pakistan has undertaken against terrorism over the years.

Opposition walks out of session during Murad Saeed’s speech

The disgruntled opposition members walked out of the NA in protest during the speech of federal minister Murad Saeed.

After which, the NA speaker tasked Foreign Minister Shah Mehmood Qureshi to conciliate with the opposition members.

“When I end my speech, opposition will return by itself,” remarked Saeed on the opposition members, who were earlier chanting slogans against the budget.

FM Qureshi then took the floor to address the House, where he said that he wants to ask something from the opposition.

“Whenever Murad Saeed stands up to make a speech, why does the opposition run away?” said Qureshi, adding that the opposition had warned that it will not let the budget get approved.

During the address of the foreign minister, the opposition members came back to the session over which Qureshi sarcastically attributed their return to Saeed’s 'psychic' abilities.

The foreign minister, while denying the demand of the opposition, said that the prime minister will not resign as he has the mandate of the public.