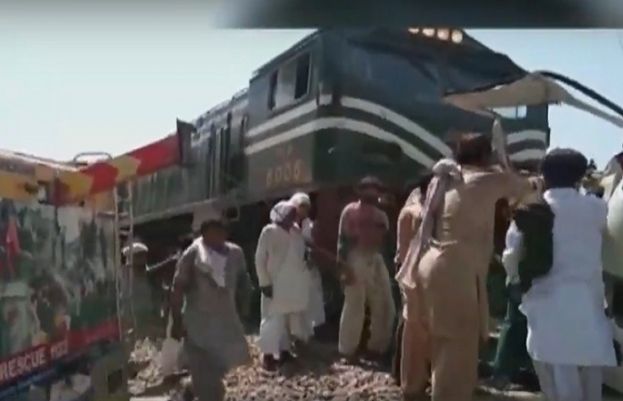 A Lahore-bound train rammed into a passenger van at a railw ay crossing near Farooq Abad railway station in Sheikhupura on Friday, killing at least 19 people and injuring several others.

According to rescue sources, most of the passengers travelling in the ill-fated vehicle hit by Shah Hussain Express at the unmanned level crossing were Sikh Yatrees. The train was on its way from Karachi to Lahore when the accident took place.

Upon being informed of the crash, rescue teams from the railways and Rescue 1122 reached the site of the accident and began shifting the injured and the dead to a nearby hospital.

Meanwhile, Minister for Railways Sheikh Rasheed Ahmed, taking notice of the accident, has ordered authorities to launch immediate action against those responsible for it.

Prime Minister Imran Khan has expressed deep grief and sorrow over the loss of precious lives in the train accident in Sheikhupura. He directed to provide best possible medical treatment to those injured in the accident.

Punjab Chief Minister Sardar Usman Buzdar also expressed grief and sorrow over the crash and offered condolences to families to the victims. He issued directives for the health authorities to provide special healthcare to the injured.